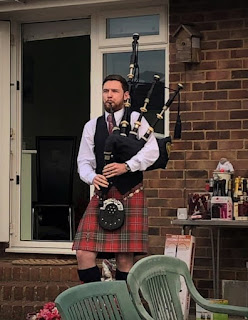 Grade 4A Pipe Band Gatwick Caledonian is delighted to announce the appointment of Tom Curd as Pipe Major and Andy McBride as Lead Drummer with effect from August 2020. Gatwick's honorary president, Arthur Farrell said "Absolutely delighted with the news and many congratulations on their appointment. You will have your work cut out, but I know how much you like a challenge!"

Andy started learning snare drum in the late 70s with the Pride Of Murray Pipe Band under the tutelage of John Moneagle, and furthered his percussive journey on Drumset and Orchestral Percussion at the Royal Birmingham Conservatoire. He later pursued a career as a professional musician and now combines playing in many varied ensembles with peripatetic teaching in schools around the Surrey and Hampshire areas. Andy has played as a corps drummer in the Clan Sutherland and Scots Guards Association (South) Pipe Bands and most recently as lead drummer with the Pride of Murray for five years. Andy said "It's a very welcome opportunity to play again in a pipe band and Tom is a very enthusiastic and experienced piper, with a vision I share, to take the Gatwick Caledonian Pipe Band forward in the future."

Tom said "I'm really excited by the challenge of becoming Pipe Major of Gatwick Caledonian Pipe Band. This is a band that is steeped in history and I feel privileged to be leading the band into its next chapter. Gatwick was the band I first competed in all those years ago and feel it is right that I can now give back to the band. I have learnt so much from some inspirational Pipe Majors and will be leaning on that experience to move the band forward. Andy and I are on the same page when it comes to our approach so I am excited to be working with our new Lead Tip. This will be a fresh start for the band so anyone looking to join the band is more than welcome to get in touch with myself or Andy. The hard work starts now, and I can't wait to get stuck in."