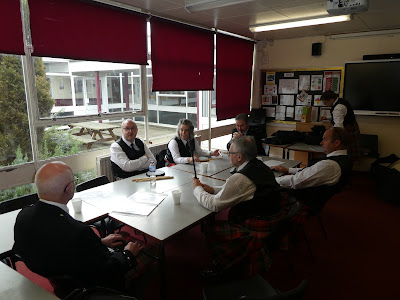 We entered a mini band in to the RSPBA London competition at St Albans, in both the G4 Marches and the G4 M.S.R.

We were not on until the afternoon so some early practice ..

We were missing two senior players,  but the rest stepped up and gave a good account.

The band practices on Sunday mornings at 09:30 in the Copthorne village hall, in Copthorne, in West Sussex.

Take the M23, Junction 10, exit to Crawley and East Grinstead, at the roundabout take the first exit, towards East Grinstead.
Follow the road to the next roundabout (Copthorne Hotel) and take the first left into Copthorne and then after following the road past some houses turn right into Copthorne Bank at the pub.
Hall about 1/2 kilometre further down on the left.
Experienced musicians are always welcome.

The band and individual pipers are available for functions.

.. Anyone wishing to join our professional pipe band.

No experience - Learn how to play with us, tuition given to all members.
Already playing pipes or drums and wish to up your game, competing at Grade 4 or Grade 3 levels, or just want to parade with the band at engagements.
Everyone is welcome.